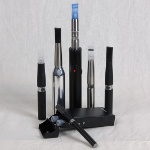 Zitat:
"he electronic cigarette concept first appeared in a patent acquired by Herbert A. Gilbert in 1963.[1] The device was described as, "...a smokeless non-tobacco cigarette ... to provide a safe and harmless means for and method of smoking by replacing burning tobacco and paper with heated, moist, flavored air..." Due to the limitations of technology available at the time, and because tobacco was not yet generally accepted as harmful, this device never reached manufacturing.

The modern electronic cigarette was invented by Chinese pharmacist Hon Lik in 2003 and introduced to the market the following year. The company he worked for, Golden Dragon Holdings, changed its name to Ruyan (meaning "to resemble smoking"), and started exporting its products in 2005–2006, before receiving the first international patent in 2007."